This blog was the second version of Prairie Dreams for me... and 2015 has brought about the third and final version. I've create a space that's undeniably me... no pretense, no nothin' else... the new blog is at this link: http://anitahohl.blogspot.com/

Thank you for reading here, and I hope you'll join me at my new digs!! xox

Oblivious humans,
trudging from car to store
through the super-size parking lot,
with their lists of things they hope
will make their lives
more meaningful,
thinking of anything but
this moment,
while over their heads
a ribbon of a thousand joyful starlings
perform a precision ballet
diving, spinning, swirling
against a fiery Autumn sunset.

She Is Only Sleeping

SHE IS ONLY SLEEPING

Being on the edge of winter
feels like Death looking
over my shoulder - I dread it's coming.

But when I turn around to face it,
I see only a silent old man,
his pockets full of sand
for Mother Nature's
sweet sleep.


After a childhood where I was constantly judged, belittled, and bullied by my peers (and my mother) I have become this person who constantly expects that from anyone I'm around, except Rick and the kids.

I am never "myself" in person with others as I am when I'm alone, connecting with people online. I am "authentic" online, in writing, but when I am physically present with anyone I find it hard to look people in the eyes, and constantly look for ways to escape, or at least shrink back into the shadows, unnoticed. It's one of the reasons I communicate so much better in written words than when speaking.

After 47 years you'd think I'd have found a way to feel safe around people, but it just hasn't happened.

"In a study published in 2003 in the journal Cognitive Behavioral Therapy, a team of Canadian researchers examined the effects of exposure to bullying on a person's long-term chances of developing an anxiety-related condition such as social anxiety disorder, panic disorder, or obsessive-compulsive disorder (OCD). The authors of the study concluded that more than 90 percent of the study participants diagnosed with social anxiety disorder(social phobia was the term used by the authors) self-reported a personal history that included extreme exposure to teasing from others. By contrast, only half of the participants with OCD reported an extreme teasing history, while only one-third of the participants with panic disorder reported such a history." - taken from THIS ARTICLE

So reading this, I've learned that at least my experience isn't unusual. It's sad to me that this happens to others, too, though. It's almost an emotional-social  "PTSD". There are many other studies out there now saying the same thing.  THIS ARTICLE even says that bullying causes physical changes in the brain.
So, now all I need to do is figure out how to work through this without the help of a professional. Those of us who can't afford that kind of help are at a serious disadvantage, but surely there is a way though this. I've found lots of articles to read about "recovery". Is it ever too late for recovery? Is the damage permanent? A bible study of how God sees us (me), our worth in His eyes, may help, now that I'm thinking about it.

"What then shall we say in response to these things?


I can say these things to others and believe them 100% - why can I not believe them for myself? Is it the physical changes in my brain that prevent me from making that connection on a personal level? so many things to wonder about... I many never know the answer or find the way out. But I'll keep trying.
Please - don't minimize the seriousness of SA because you don't feel it... and don't try the "buck up" speech. Similar to the "snap out of it" speech frequently given to people who are clinically depressed, it is very demeaning, and doesn't help anyone.
"How can a Christian overcome social anxiety?" 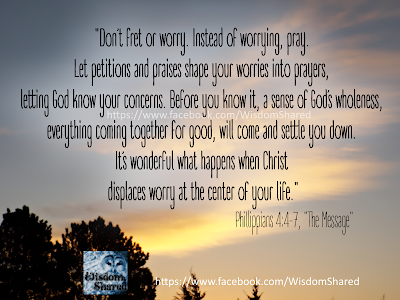 Anita
Greensburg, Kansas, United States
A family on a mission to live a modest, Christian life, focusing on the natural, organic things that are most important to us, sharing our triumphs and struggles, questions and answers.